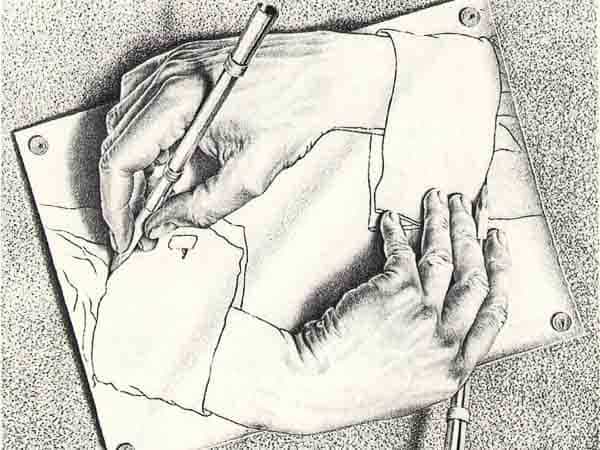 One of the most complete accounts of the mechanisms of creativity I have studied was presented by Margaret Boden in her book, The Creative Mind: Myths and Mechanisms (Boden, 1990). Her account starts by discarding ideas about possible romantic or divine origins of this aspect of human intelligence and focusing on ideas from history of science, Artificial Intelligence and Psychology.

First of all, Boden’s Maps of the Mind are based on the notion that internal representations, and their transformations, are at the core of the creative act. Boden refers to the mind as a conceptual space that resembles an unexplored geographical landscape – which is known by the mechanisms of intelligence, in a way that is analogous to the way it would be known by a cartographer. In the unexplored landscapes of the mind, however, the geography can change and be recreated over and over again. It will even come into existence as the “cartographer” moves. Beyond taking the representational corner as her starting point, Boden grounds her account using generative systems, which are at the core of the theory of computation, as the means for explaining the exploratory dynamics occurring in her Maps of the Mind.

Generative Systems consist of a set of ‘generative Elements’ or tokens, which can be conceived as abstract symbols in general, and another set of ‘generative principles’ that will determine how the former can be combined in order to construct meaningful units. Familiar examples of generative systems are Language (words and grammar rules), Logic (Boolean variables, and logical connectors) and Chess (pieces and valid moves) among many others. According to Boden, what is happening in our minds as we represent, is the exploration, creation, stretching and even abuse of generative systems. Furthermore, Boden adds that these mechanisms are goal-oriented or, similarly, activated by the individual’s pursuit of a particular objective or purpose, be it the resolution of a problem, the understanding of a phenomenon or simply the pure pleasure of play and exploration.

To illustrate Boden’s Maps of the Mind idea, she gives a phenomenological description of how August F. Kekule ́ discovered the chemical structure of Benzene (Koestler, 1964).

August Friedrich Kekule ́was one of the most prominent chemists of the late nineteenth century. Working in the orthodoxy that characterised this part of history of Chemistry and being one of its strong believers, Kekule ́ worked following strict rules. At that time, the organic chemist’s job was basically to “discover” by experimentation the components and proportions of these present in the different organic compounds whose existence was assumed. The final product was the detailed description of a carbon-based string with which the organic compound could be successfully produced in the laboratory. For a description to be accepted as valid it had to conform to two rules: First, it had to be coherent with the accepted laws of organic chemistry of the time. Second, it had to fit the behaviour of the given compound in laboratory conditions.

The procedure was successful for describing many aliphatic organic compounds such as ethyl alcohol, but not for other compounds like benzene. The search for the description of benzene was giving Kekule ́ — and other scientists of the time — a very hard time, as several attempts were suggesting more and more that finding a description for benzene was impossible.

The problem was related to the valence of the carbon atom. It was known at the time that atoms had limited and fixed capacities for linking with other atoms. Around 1858 Kekule ́ developed a theory which postulated that organic compounds were formed by open strings of carbon atoms. He also had taken carbon to have a valence of four and hydrogen a valence of one. This meant that in a open string of carbon atoms, the ones in both ends of the string would use one of their valences to link to the inside of the string and the ones in the middle would use two valences (one for each side). Following this, atoms in the ends of the string would have three free valences to connect to other atoms and those inside the string would have two. Back to the Benzene description problem we know that experimental evidence had already shown that that the Benzene molecule was made of six atoms of carbon and six atoms of hydrogen. Using the laws stated by Kekule ́ for the formation of organic compounds, the Benzene molecule, having six carbon atoms would need fourteen hydrogen atoms and not six. Double or triple bonding was out of the question because experimental evidence had shown them to be impossible to keep in a stable manner. The compound did not capture monovalent atoms either… Who or what was wrong? Kekule ́’s measurements used to obtain the experimental evidence? or the foundational theory of organic chemistry? For several months Kekule ́ worked looking for an intelligible molecular structure to describe Benzene without success. With all probability he explored many of the possibilities that the laws for chemistry of that time allowed.

Up to this point, the story does not go beyond Kekule ́ exploring the combinatoric space formed by the chemical-element representations together with the rules that could be used to combine them. This description could be called “The late XIX century organic chemistry Generative System”. What about Boden’s Maps of the mind?. Boden’s supports the relevance of her ideas by quoting the description of an experience Kekule ́ had which helped him to solve the Benzene problem. He described it the following way,

I turned my chair to the fire (after having worked on the problem for some time) and dozed. Again the atoms were gambolling before my eyes. This time the smaller groups kept modestly to the background. My mental eye, rendered more acute by repeated vision of this kind, could not distinguish larger structures, of manifold conformation; long rows, sometimes more closely fitted together; all twining and twisting in snakelike motion. But look! What was that? One of the snakes had seized hold of its own tail, and the form whirled mockingly before my eyes. As if by a flash of lighting I awoke…

Originally quoted in Findlay, A hundred years of Chemistry, p.39.
 
In terms of the initial formulation of the problem, what Kekule ́ realised was basically that the behaviour of the links between the carbon and hydrogen atoms could be transformed from the open curve with fourteen free valences into a closed one that left twelve open links. Apart from challenging the organic chemistry community of the time (with the proposal of a closed carbon ring) Kekule ́ also had to redefine some of the rules for the connections between atoms, perhaps, encouraged by the possibility of closed rings in existing Organic Chemistry. This was because he could not come up with a characterisation that would be in accord with the empirical evidence. The benzene molecule only attached six hydrogen atoms, so Kekule ́ proposed a dynamic structure which switches chemical links.
In terms of Boden’s Maps of the Mind,  what Kekule ́ experienced was an active process of conceptual construction – which took him to where he wanted to go: the correct formulation of the benzene molecule. In this case, the topological concepts about open and closed curves mentioned above had to be present in Kekule ́’s mind, at a same level of description as the organic chemistry rules he knew.  This allowed the transfer of the notion of closed topology into the system of rules for writing organic chemistry he knew.

In more everyday terms, we are actively exploring and constructing maps of the mind when we solve problems by analogy, or express emotions non-trivially using clever metaphors.