I have been fascinated by the many elements of Loretta Lux‘s fine art photography over the last couple of years, since I was introduced to her work.

Loretta Lux was born in Dresden, Germany, in 1969. In 1989 she left East Germany for Munich, months before the fall of the Berlin Wall. in 1996 she graduated from the Akademie der Bildenden Künste in Munich. Lux is a trained painter. She said in an interview that was not very comfortable with the ‘mess caused by paints, solvents, brushes and so on’ and that this was one of the reasons she turned to photography around 1999. Soon after she transitioned to the kind of work that would become her artistic signature: Photos of children, disturbingly gazing into nowhere, with empty eyes.

In her photos, Lux speaks about a very peculiar vision of childhood. And clearly she is not documenting anything about the children themselves. Instead, they become actors that embody something Lux is after, and which seems difficult to grasp precisely, yet it is not hard to understand on an intuitive level.

I never allow them to wear their own clothes. My work isn’t about these children. You can recongnise them, but they are alienates from their real appearance.

This clearly does not seem to be the kind of work that flows out of espontaneity. It feels very controlled, planned, and executed to a pre-conceived vision to exact detail. This is something I have personally been interested in for a long time, the interplay between art as free expression of the soul, and art as a manifestation of controlled thought. The boundaries do not need to be sharp, but anyway. Let us continue speaking about Lux.

Because my style is so different from other work, people regard it as a kind of brand, while I’d rather focus on developing the psychological elements in each image

Lux alters the images in a way that, to my perception, leaves nothing superfluous; only what is relevant to the concept of the picture is there. She may distort human proportions, and set her children against backgrounds she photographed or painted before. 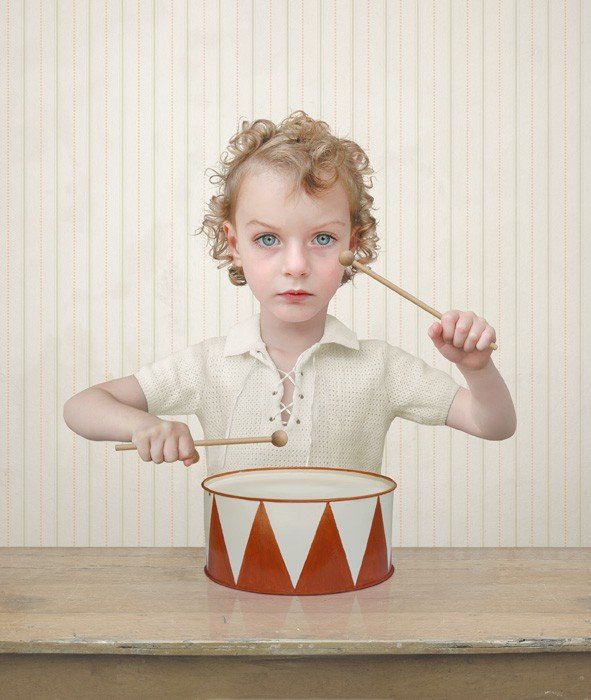 Nobody really knows much about Lux’s technique. And several people have tried to ‘reverse engineer’ the path to her portraits. Nobody has been really able to do it so far. She has her brand secrets and I think it is wonderful that she does. I believe that the raw photos contain most of it already and that there is a lot of careful digital painting on top of it. I know from my own experience with the lonely houses that it is extremely hard to change shadows that are already present in the source image for example, so I try to capture my houses lit in a way that is as close as possible to what I want them to look like in the final piece. 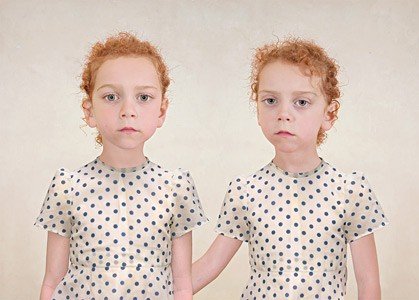 There is still a degree of work that Lux does on removing shadows, on making the skin look almost translucent, and on the eyes, her digital manipulation pipeline is exquisite.  Lux works from digital images, and then turns to large negative, which is then printed on Ilfochrome, at least to her latest pieces. Ilfochrome paper is not being produced anymore. For transferring a digital piece onto a negative you can still go to Bayeux in the UK, see here. I think the closest paper and printing technique to what Lux used is Fujiflex, which I have used in some of my own pieces.